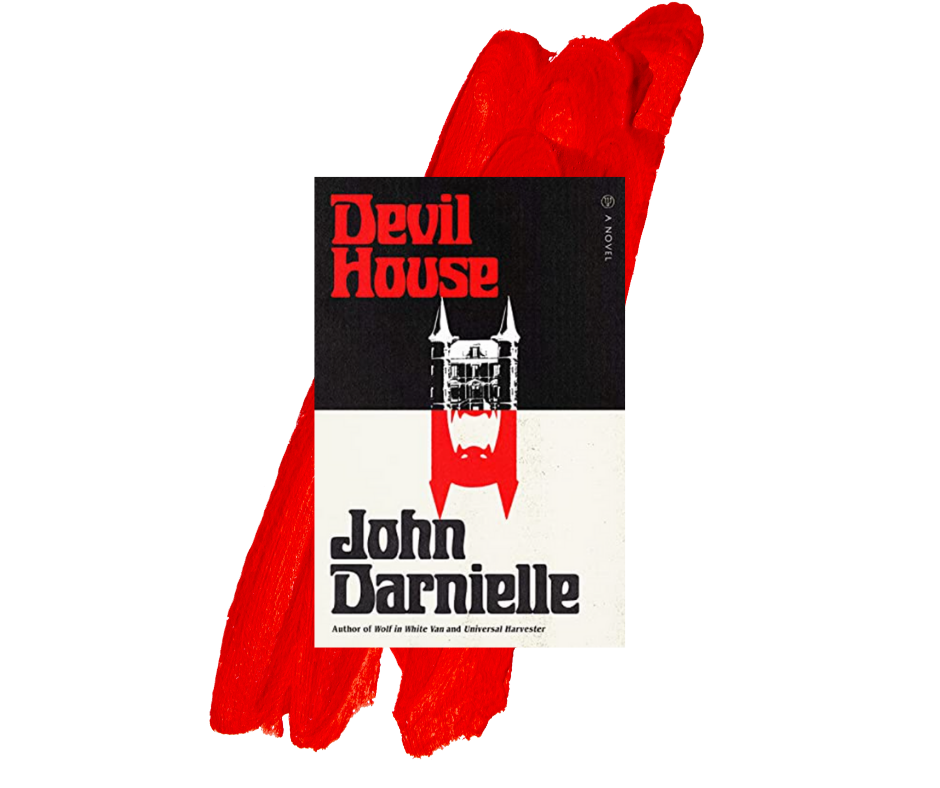 Devil House by John Darnielle
My rating: 3 of 5 stars

Devil House by John Darnielle is part crime novel, part novel about a writer, writing. The main character, Gage Chandler, narrates most of the chapters. We hear the stories of his most successful book, The White Witch, and his current book, Devil House, and some of my favorite bits are the chapters that discuss his writing style and methods.

“I try to honor the dead in my books. It’s one of the things, I hope, that sets me apart a little from my partners in true crime. When I read what others write about places where the unthinkable became real, the focus always seems off to me. Victims spend their entire time in the spotlight just waiting for the fatal blow, on a conveyer belt that leads to the guillotine: I pity their fates, but it’s hard to grieve for them, because the treadmill on which they ran feels specifically designed to kill them.”

The undercurrent running through this book is about the act of creating a story and honoring the subjects. How can we do that and create a story people want to read? How can story possibly convey a version of truth reverent of all the people involved?

Perspective and place color any story, making the deeper truths, beyond objective statements of fact, mirage-like. Every person can be seen in a million different ways through a million different eyes. So what is the truth we tell? Is anyone truly interested, or are their curiosities really expectations?

The character Seth explains this conundrum well, “‘They didn’t see me, and you don’t see me, and nobody’s ever going to see me except the people who actually know me outside of that whole story,’ he concludes – there’s no rancor in his voice, no anger. He’s just laying out the facts on the ground for me, making his case. ‘Unless you were actually inside, any story you end up telling will be some distortion.’”

All of Darnielle’s characters have depth and complexity, and I love when authors include gifted characters. Seth is noted as having a fantastic memory, vivid imagination, issues with focusing when something isn’t interesting to him but he has laser focus with his passion projects. He’s entrepreneurial and prefers small intimate conversations with one other person to crowds which can feel overwhelming. Gage Chandler says, “I get the feeling that there is no point in trying to hide things from Seth, who reads moments accurately while they’re still developing.”

I found the writing to be spectacular, but there were a number of repetitive details. Derrick getting ready for college, for example, seemed a detail I heard so much about, many pages devoted to his background that could have made their point much more quickly. “Enough with his college applications,” was one of my notes mid-way through the book. My larger curiosity kept me interested despite the many detours and sometimes draining detail.

While I sense the writer had a deeper purpose in all of his choices, one that maybe even mirrored the internal experience of Gage Chandler, I found myself frustrated a number of times, wanting to get back to the really good stuff. There was an entire chapter that seemed completely unrelated to the story other than to link the truths of the children in Devil House to classic archetypes and mythologies (another version of their personal truths that would not be told in any crime novel, except Darnielle’s). As I write this, I might be changing my stance on this chapter.

I expected this to be a horror story going into it, and while there were components of the crimes that were grotesque, it was not a horror novel.

“Even when we don’t find ourselves doing something wild, we sort out several selves along the line as we’re becoming the people we will be. It’s a constant, half-conscious process.”

This quote is talking about the character Angela, but I feel this applies to Chandler. He is half-consciously communicating with several layers of his Self while writing this book, integrating his experience. This is my favorite aspect of Devil House. It’s not just telling you the surface stories, it’s leading you through a half-conscious journey of growth and connections, which is in part possible due to the method in which the story is told. Really fascinating.

I would recommend this book. It was dense and not something to be devoured in one or two evenings, but it was so well-written and had layers of depth that kept me reflecting on human nature, story, and my own expectations while reading.

Other writers, or wannabe writers, would enjoy this read as would people who enjoy true crime or historical fiction, and philosophers who love a read about human nature.

*As an Amazon Associate, I earn from qualifying purchases.