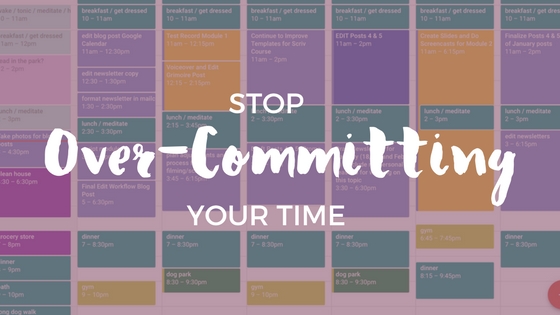 Do you self-sabotage by underestimating how much time you need to get things done?

One of the biggest causes of overwhelm is underestimating how much time a task will actually take to complete, and taking on too much as a result.

Before I paused my coaching practice to focus on creating online courses, I had a client who consistently didn’t allow enough time to complete her big dream projects, thus setting herself up for disappointment and overwhelm.

She wanted to launch a podcast and gave herself one week to locate and price a recording studio and complete five interviews, which had not yet been scheduled. She didn’t consider many of the other tasks that go along with starting a new podcast such as, setting it up with iTunes, creating a home for it on a website, writing the questions and plotting out the storyline and theme, etc.

This wasn’t the only project she was underestimating. She had previously planned to create an opt-in, have her web person program a pop-up, create a landing page, and send out an email to a cold list of subscribers all while she was working on a deadline writing project from a client. On top of all that, she was coming down with the flu. She gave herself three days to do this, without considering the emotional work and day to day stuff she had to do.

Does this sound familiar? We all do this at times. Time management is a multi-faceted skill set with deep emotional ties for some of us.

Could the Issue Be Fear-Based?

There are emotional and logistical factors involved in estimating the scope and weight of any project you take on.

Emotionally, we create situations that seem familiar or reinforce our long-held limiting beliefs about ourselves. If you have a belief that you’re “not good enough,” taking on too much may serve to confirm that belief.

If you’re used to being under stress and pressure, you may overload your schedule because it feels familiar, even if it’s not serving your new goals and beliefs.

There can be many emotional payoffs for staying in overwhelm. My client was setting herself up for failure, she could confirm her long-standing beliefs that she was unworthy of success.

You may be saying to yourself, “Why would anyone want themselves to fail?”

Think about how much more comfortable known disappointment is versus the fear involved with succeeding and entering an unknown world of challenges and vulnerability. Clinging to limiting beliefs, and staying in a state of overwhelm, may seem more comfortable to our subconscious minds.

Logistically, my client didn’t have a system for estimating just how much work she was committing herself to, and how to realistically set aside time for the tasks. She needed to slow down, do a little planning before committing to a project or deadline, and establish a visual way to see where her time was going.

Do You Want to Stop Taking on Too Much at Once? WATCH THIS VIDEO.

With a few practices that elevate your self-awareness, you can start to know exactly how much time you have for new projects and identify your personal working style.

I’ve been using the same system for over a decade to help me estimate how much time I really have available and the amount of time and energy new tasks will require from me.

How to Do This For Yourself

It starts with setting realistic, yet ambitious goals, then break them down into next actions.

If you’re doing something for the first time, you likely can’t predict every step or action needed to complete the project. You may just have to jump in there and try it out. You will soon see more of the picture as you start doing.

For example, my partner is new to pitching freelance writing prospects. He set aside one hour for researching companies to send cold emails to. When he actually did the task, he realized it was going to take more work.

He broke down “researching companies” into smaller next actions. He had to dig deeper than finding a general email address and find the right person to send the email to, someone who could be a contact for him.

What he originally estimated to be a one-hour job was actually a two-week sprint. He would set aside 1-2 hours, every other day, for the next two weeks, not including the waiting period for responses, on his Google Calendar.

When he thought the project would only take one hour, and he failed to achieve what was planned, it was disappointing, even a little deflating. Now he feels confident he can accomplish the project, and do a great job, in the time he’s earmarked.

Is the Effort Worth It?

When you’re doing something new, fear and doubt will often linger around your head. You’re making new neural connections, establishing new habits and ways of seeing. It takes extra time and focus to get new habits going. Be persistent. Don’t give up because it takes extra effort to start something new. Your effort will pay off in no time, and you’ll have the new skill of being the master of how you spend your time.

What goal or project are you going to break down into next actions and plot on your calendar? Let me know in the comments. Have you tried this system or another system? I’d love to hear about it!